Eckhart Tolle; born Ulrich Leonard Tolle is an author of some best selling books on spiritual teachings. He is known for his books titled ‘The Power of Now’ and ‘A New Earth: Awakening to Your Life Purpose’ and the first book earned an estimated sale of 3 million copies and the later one earned a sale of 5 million copies. The New York Times has titled Tolle as the ‘the most popular spiritual author in the USA’ and Watkins also titled him as the ‘most spiritually influential person in the world’. He does not specify him to any religion rather he claims to have been influenced by a vast range of spiritual works. In 2016, Eckhart Tolle was listed in ‘Supersoul 100’ by Oprah Winfrey which was a list of visionaries and influential leaders. He claimed that he was under depression for much of his life until age 29 when he felt an “inner transformation” and wandered “in a state of deep bliss” for several years before becoming a spiritual teacher. In 1995 he moved to Vancouver, Canada. He divides his time in between Canada and the USA. 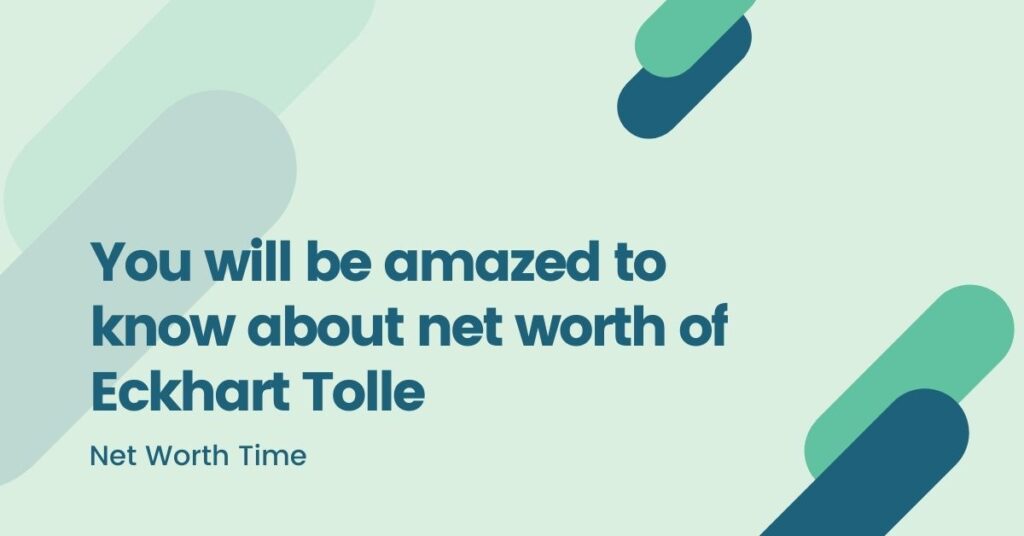 Eckhert Tolle’s main earnings are from book sales. He also works as a counsellor and spiritual teacher. He has a company to sell relevant products called ‘Eckhart Teachings’. He has a self titled website too where he streams different videos. He also gives speeches and conducts workshops and meditation on a regular basis. Tolle claims that he never had an intention of creating a heavy commercial structure.

At the age of 19 Eckhart Tolle moved to London where he started teaching German and Spanish. For studying philosophy, psychology and literature he got enrolled at the University of  London. After graduating he got a scholarship for postgraduate research at Cambridge University but later dropped out because of his depression problem.

After a period of time he started working as counsellor and spiritual teacher for five years. Then in 1995 he moved to Canada. Tolle’s first book ‘The Power of Now’ was published in 1997. It was published only 3000 copies as first edition. He and his friend delivered the copies personally in the nearby areas. Later in 1999 the book was republished on a large scale and later reached a sale of 3 million copies. In 2005 he published his book ‘A New Earth’  which gained a sale of more than 5 million copies. 3.5 million copies of the book were shipped in four week after Oprah Winfrey selected the book in her ‘book club’ in January 2008. The book was in The New York Times best seller list many times in between March and September 2008. Beginning in May 2008, Tolle partnered with Oprah Winfrey to produce a webinar series. The series included discussion between Winfrey and himself, meditations and questions from viewers from skype. He also appeared with the Dalai Lama at the Vancouver Peace Summit in September 2009. The same year he published another book titled ‘Guardians of Being’ which is a picture book illustrated by Patric McCdonnel.

His other books are ‘Stillness Speaks’, ‘Milton’s Secret: An Adventure of Discovery through Then, When, and the Power of Now’, ‘The Leap: The Psychology of Spiritual Awakening’, ‘The Calm Center’, ‘Parenting with Presence’ ,‘Oneness with All Life’, ‘Guardians of Being’ etc.

He has also published many CDs and DVDs on his teachings. These are sold through his website.

Eckhart Tolle was born as Ulrich Leonard Tolle in Lunen, Dortmund, Germany in 1948. He came through an unhappy childhood as his parents fought and eventually separated and he grew up in post-war Germany full of bombed buildings. In 1951 he moved to Spain to live with his father. As his father did not force him to study in high school he studied literature, astronomy and various languages. He moved to England in 1967.

Eckhart Tolle married Kim Eng who is also a spiritual teacher who teaches yoga and meditations. They met in Canada in 1995. The couple has no children. Eckhart Tolle claims has not revealed which religion he follows but he claims that he is influenced by different mystic schools of different religions.

Tolle admits that he is influenced by Jiddu Krishnamurthy and Ramana Maharshi. James Beverly, a professor of Christian Thoughts and Ethics at the evangelical Tyndale Seminary in Toronto, says that Tolle’s view does not match with core Christianity. Though Stafford Bettty, a teacher of Religious Studies at California State University, Bakersfield says that Tolle’s view and Christian Mystics have some similarities.

Net Worth of Nassim Taleb

Net Worth of Saygin Yalcin