Neil deGrasse Tyson is an American space scientist and author. According to ‘celebritynetworh.com’ Neil Tyson’s worth is about  5 million USD. He is currently working as a Director at the Rose Center for Earth and Space in New York city.

Neil deGrasse Tyson is a popular astrophysicist, expert in planetary science, author of many books and well-accepted science communicator and an actor. Tyson was assigned the post of the director of the Hayden Planetarium at the Rose Center for Earth and Space in New York city in 1996 and has been working on the post till now. He is the one who founded the department of Astrophysics there in 1997.Also he has been a research associate in the department since 2003. Tyson won the Public Welfare Medal from The US National Academy of Sciences in 2015. 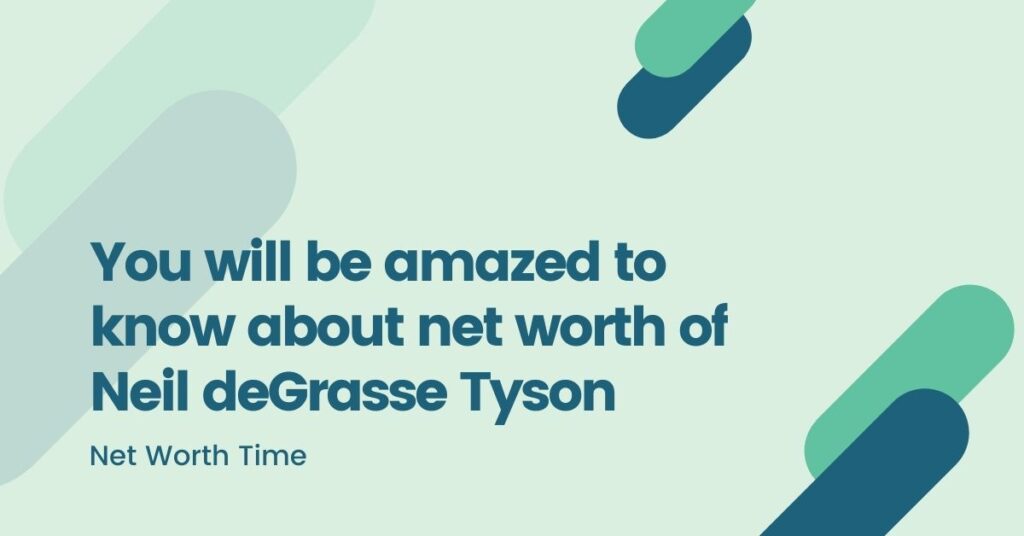 Neil deGrasse Tyson is an author of many books. He also hosted many popular TV and radio programs as a science communicator. He also worked in many government committees. Above all, he is a researcher and scientist. These are his main earning sources.

Neil deGrasse Tyson studied in Harvard University, University of Texas at Austin, and Columbia University. Tyson started working as a lecturer of Astronomy at the University of Maryland from 1986. He worked as a postdoctoral research associate at Princeton University from 1991 to 1994. His area of research is concentrated on cosmology, galactic astronomy and stellar formation. Tyson has worked in many positions at renowned institutions. Some of them are University of Maryland, American Museum of Natural History and the Hayden Planetarium etc. In 1994, he joined the Princeton faculty as a research scientist and later became a lecturer there. In the same year he joined the Hayden Planetarium and later became a director of this institute in 1996. The Department of Astrophysics of this institution was established by him in 1997. Tyson served on the Commission on the Future of the American Aerospace Industry in 2001. Later, he also served on the President’s Commission on Implementation of United States Space Exploration Policy in 2004. After serving on the committees he was awarded NASA Distinguished Public Service Medal.

Tyson has hosted and participated in many television and radio programes and documentaries. Among them ‘Origins: Fourteen Billion Years of Cosmic Evolution’, ‘400 Years of Telescope’, ‘Nova Science Now’, ‘Cosmos: A Spacetime Odyssey’, ‘Startalk’ are worthy of mentioning. In 2020 he has hosted a documentary titled ‘Cosmos:Possible Worlds’.

Tyson appeared in DC Comics’ ‘Batman vs Superman: Dawn of Justice’ film as himself. He also appeared as himself in ‘Zoolanders 2’. He has appeared in a number of TV series, animated movies and live action movies too.

Tyson began writing the magazine ‘Universe’ for Natural History magazine. Also he has written some popular books on astronomy and cosmology.

‘Universe Down to Earth’, ‘Just Visiting This Planet’, ‘One Universe: At Home in the Cosmos’, ‘Cosmic Horizons: Astronomy at the Cutting Edge’, ‘Death by Black Hole: And Other Cosmic Quandaries’, ‘The Pluto Files: The Rise and Fall of America’s Favorite Planet’, ‘Space Chronicles: Facing the Ultimate Frontier’, ‘Welcome to the Universe: An Astrophysical Tour’, ‘Astrophysics for People in a Hurry’, ‘Accessory to War: The Unspoken Alliance Between Astrophysics and the Military’ are some of the books he has authored. He has also published many scientific articles and research papers in many journals.

He has won many awards other than the ones mentioned earlier in this article. Among them are the Medal of Excellence from Columbia University, New York City (2001), The Klopsteg Memorial Award (2007), The Stephen Hawking Medal for Science Communication (2017) worth mentioning.

In 2018 he was awarded an Honorary Doctorate by Yale University, New Haven,Connecticut.

Neil deGrasse Tyson born in Manhattan, New York in 1958. His mother’s name was Sunchita Maria Tyson. She was a Gerontologist for the US Department of Health, Education and Welfare. She was of Puerto Rican origin. His father is Cyril deGrasse Tyson. He was a sociologist and human resource commissioner for New York City Mayor John Lindsey and was of African-American origin. He has two siblings.

Tyson married his wife Alice Young in 1988. They met in Physics class at the University of Texas. The couple has two children: Miranda and Travis. Tyson lives in the Tribeca of lower Manhattan with his wife.

In 2018, four women made accusation of Sexual Harassment against Tyson. Thchiya Amet El Maat claimed that Tyson dragged and raped her in 1984 while the both were in UT Austin. Tyson denied the accusation. Katelyn Allers who is a professor at Bucknell University claimed that Tyson touched her in an inappropriate manner at a 2009 American Astronomical Society gathering. Tyson claimed that his action was misinterpreted. Ashley Watson who was Tyson’s assistant on Cosmos, claimed that Tyson made inappropriate sexual advances on her. In what Tyson claimed as a Native American handshake, he held her hand and looked her in the eye for a few seconds and When she left, he told her he wanted to hug her but rather in case he wanted more. Confirming the basic facts around the situation of Allers and Watson’s allegations Tyson claimed his actions were misinterpreted and apologized for any misunderstanding or offense. The fourth woman was an anonymous one. She claimed that Tyson made bad comments about her during a 2010 holiday party at American Museum of Natural History.

Fox, National Geographic, the Museum of Natural History, and the producers of Cosmos announced investigations and delayed some of the programes. In March 2019 both Fox and National Geographic both announced that their investigation was complete and there will be no further comment. They continued their programes with Tyson. In July the American Museum of Natural History declared that they will allow Tyson as the Director of the Hayden Planetarium.